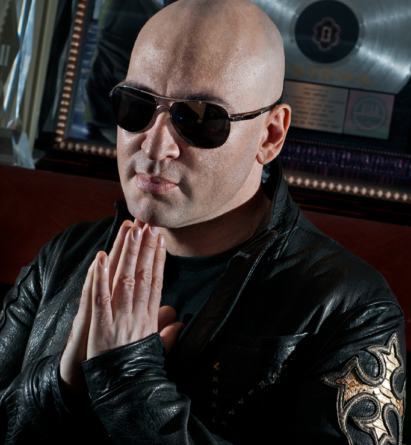 I had heard about him ever since Avril Lavigne broke out with her smash hits “Complicated” and “Sk8ter Boi.” He’s produced for Britney Spears, Korn, Hilary Duff, Shakira, David Bowie, Katy Perry and others. And today he’s hotter than ever.

I had heard about him ever since the breaking out of Avril Lavigne. He was part of “The Matrix” music production team that gave Avril and other pop stars their hits, their sound, their direction, and in some cases, their stardom. And he’s still hot. For example, the music video to Rihanna’s song “Cheers” (that he co-wrote) already has over 61 million views. See for yourself.

Scott was introduced to Tolga and I by the never-ending Nicholas O’Toole, from Open Labs fame, who continues to amaze us with his world-class strategies.

Scott Spock, from St. Louis, MO began his career as a jazz trumpet player, later becoming a skilled songwriter and programmer. Spock is a member of The Matrix, a music production team including Lauren Christy and Graham Edwards. They gained fame in the early 2000s after producing a series of hits for Avril Lavigne, Britney Spears, OffByOne, Busted, Son of Dork and Hilary Duff.

“It was hard to constantly describe the three of us,” Matrix member Lauren Christy told one interviewer about the outfit’s early days. “So we came up with the name ‘The Matrix.’ The matrix is a name for the womb, or the rock, which everything comes from.” –From Open Labs Web Site

“We all do everything: creating melodies, lyrics, and tracks. We have three, different ProTools rigs. When we write, we like to sit down with a guitar and piano, rather than starting with a track. Graham plays guitar and bass, Lauren plays piano, and I play piano and trumpet. Also we all sing, often on both our demos and the masters,” Scott said.

The Matrix say that while they have only written or only produced for artists, they prefer to be more of a one-stop shop.  Here’s a shortlist of their discography. Keep in mind they’ve written/produced over 1,200 songs, so it’s literally only the highlights. View The Matrix Discography here.

“He’s got crazy mad juice!” as Tolga would say in Tolga Language. (Translation: “He’s a world legend and I’m ecstatic that I met him!”) After spending a little time with Scott, Tolga and I learned that he’s forward-thinking, tech-savvy and driven. He has a fascinating private life outside of The Matrix.

When we talked he was thoughtful and well-mannered, and boy was he on top of his game.

He’s the opposite of an attention-seeker. He would stay quiet, listening intently, never anxious to butt in and stop someone else’s idea roll.  But when he spoke, we listened. And what he said was important. He had something intelligent and insightful to add to every concept or conversation. It was like he had this deep well of wisdom – almost Yoda levels – that gave him a perspective on things no one else had.

Life hasn’t been a bed of roses for Scott Spock.  Even so, his success with The Matrix has made history. He’s learned a lot.

Therefore, he has a lot to contribute  and his explosively creative energy is both infectious and exciting. To listen to Scott Spock and Tolga Katas brainstorming in the same room was like, well, looking through the Hub telescope and witnessing the birth of Polaris.

And just to be clear, Scott Spock is a Yoda Master at much more than making hit records and pop stars.  He’s known for being cutting-edge, breaking new ground, not just in sounds, but in other ways too.  It should be no surprise that he’s expanding his universe to embark on an adventurous new trek.

Regarding his next big move, he’s in ‘mysterious mode’ at the moment, sort of like dark matter.  Here’s a clue though: He’s hanging out with Tolga Katas for a reason.

Don’t say I didn’t warn you.