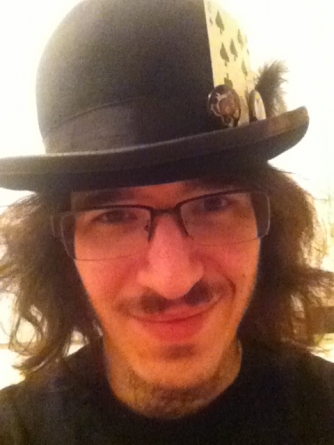 Swizec Teller is the blogger who wrote “Why Programmers Work at Night,” an article that caused a 5000% spike in his blog traffic. It helped explain and justify why developers keep vampire hours – something most people find abnormal and don’t understand. So geeks shared it. By the 4th day, he had 627 + (likes) on google plus, 550 tweets mentioning the article, 288 new twitter followers, 475 comments on Reddit, 173 comments on his own blog, 89,000 visitors on a single day – compared to his average 30,000 visitors a MONTH. He’s a true geek, he works at night, he hangs out with geeks and he’s finishing his degree in computer science. But there’s more.

Swizec Teller is the geek blogger and college student who wrote the virally explosive “Why Programmers Work at Night.”  I personally appreciated this article because it normalized and excused what I thought was the uniquely eccentric behavior of my husband, Tolga Katas.  I was curious to learn more about who wrote it.  His blog was filled with geek talk & tech tips –

You know that one piece of shitty code that always makes you cringe? Something along the lines of months = [‘Jan’, ‘Feb’ ….]; dateString = date.day()+’ ‘+months[date.month()]; Yeah that piece of code. Let’s talk about that.

along with posts for non-tech readers, including a blog himself making  Wild Mushroom Stroganoff.

I found myself intrigued by his blog – (the posts I could understand.) And I was not alone in my gratitude for his ‘Why Programmers Work at Night’ article.  He, however, was surprised by the response. “I felt it wasn’t a very informative post, just musings of a hacker who has always loved the night-time,” he wrote.  He was ”certain it wasn’t that interesting,” and  surprised that it became his most popular post ever. “How did  all of this happened? I honestly haven’t a clue, there are tens if not hundreds of posts on this blog more deserving of such infamy, but I guess people like a good pat on the back and an easy “Yeah totally. I can totally agree with that!”

True to geek form, he monitored his web stats and traffic. And he shared them.

I hoped he was from Las Vegas or LA so I could interview him in person.  His twitter said he was from Ljubljana, Slovenia.  Clever, I thought.  Only a geek with a sense of humor would have listed that as a location. I felt encouraged. Maybe he was one of those cool dudes from LA, a Hollywood hipster geek perhaps?  I wondered if he would drive to Vegas so Tolga and I could take exclusive photographs of the geekster.  First things first.

Who exactly is Swizec Teller?

Swizec Teller, it turned out, could not come by for a photography session because he really DID live in Ljubljana, Slovenia. He’s a computer science student in his last year at the university.  He started programming when he was 9 years old after being introduced to a computer in a class at school.  His father was not a programmer but a mechanical engineer.  Swizec programs primarily in python, java script, and lisp.

When I asked what he does for fun, he said, “Believe it or not, I program for fun.”  Of course. But he’s also starting to spend time long-boarding, boxing and drawing.

When I asked what inspired him to write “Why Programmers Work at Night,” he responded that he works at night, and fellow programmers are online all night too.  Chatting with them in the middle of the night gave him the idea to write about it. Swizec even knows at least one programmer in every timezone.
I asked him what % of his closest friends are programmers. He paused for a sec and said, “All my friends are programmers, so close to 100%.”

ME: Is there anything you accomplished in tech that you are especially proud of?
SWIZEC: When I managed to run readability on my server and we scraped about a million articles with it.

I didn’t know what that meant, so I looked at Tolga who gave thumbs up. I said, “Wow,” and included it for my hacker friends like Trevor Blaszo and others who will understand. Swizec is a hacker and a programmer, but he has never been to a Defcon or a PyCon or even a developer conference for that matter. In Ljubljan, they have “BarCamps” where attendees give a demo, a session, or help with one. He participates in those.
His goal is to finish college in Slovenia, head to Silicon Valley and launch a tech startup.  Silicon Valley is the perfect place for the hipster-looking geek with the hat – they will love him there. Maybe the guys with the Hackbus can meet him and give him a ride to his first Defcon where he can hang with Trevor or code with Tolga all night.
I suspect you’ll be hearing more about Swizec Teller in the months to come, so keep your eye on him.  He’s worth following.
His blog: http://swizec.com
His twitter: http://twitter.com/swizec