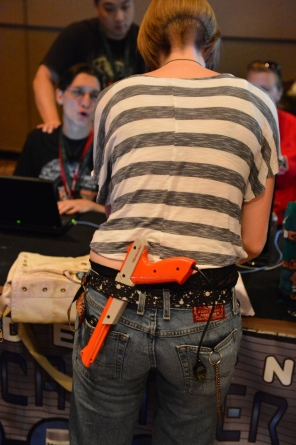 For those of you who don’t know, DefCon is a hacking conference held in Las Vegas every year and the Scavenger Hunt is one of the longest running contests whereby participants have to find/do/provide proof of a long list of hilarious hard-to-find items or outrageous activities. This is no small feat. With 2012 being the 20th anniversary of DefCon, this year’s list was beyond outrageous with nearly 1,400+ items (compared to the usual 200 in previous years.)

“Humans” (general attendees) get into teams of no more than 5 to accomplish the most items on the list that they can within 50 hours.  Enter latecomer Kristen (also known as “DoodleD”) who started a day later, and played solo just for fun under the team name “One Way”. It was her first year at DefCon and the one thing that her boyfriend asked of her was to have fun. “The original plan was just to go to talks and learn about the essence of this convention. I was getting bored though, just sitting behind a table and listening to talks on things I could barely understand.” she explained, “I soon realized that the best way to learn about DefCon was to play Scavenger Hunt.”

Out of the 37 teams that signed up, she quickly gained a spot in 5th on her first day playing. Realizing that there was a high possibility of placing at least in 4th, she pulled all her resources together to turn in as many items as possible before the Scav Hunt ended the next day. DoodleD says that the people of the con were so nice to her and so willing to help her in her quest for 4th, doing their best to find items on the list that she was unfamiliar with or that they knew someone may have. Even people she didn’t know asked what they could help with and one couple even gave her a beautiful necklace saying, “This is for being so brave and for doing what you’re doing.” She could not have been more grateful for everyone’s support.

Here are just a few photos that ASTCell of HackerPhotos.com managed to take of some of her accomplishments.

0296: unicorns and glitter (surprise us). She certainty surprised them all when walking up to the table with this on!

While turning in items at the Sacv table, ASTCell showed up with his 6mm fisheye lens to give everyone a demonstration on how that crazy piece of glass worked.

One item on the list was to have the judges of the Scav Hunt sign your chest. The Sharpie took a couple of days to come off along with the nail polish glitter according to her.

The Nintendo Duck Hunt guns were apart of Scavenger Hunt 19’s theme. DoodleD, without any place to hold it during the con, carried it around on her belt and had fake Duck Hunt battles with the judges from time to time.

Maybe she didn’t win first place, but what she did single-handedly was nothing short of amazing. In fact, the judges of this contest acknowledged this in the closing ceremonies below.

“I highly recommend everyone to play Scavenger Hunt, especially if it’s their 1st or 2nd DefCon. I got to meet a lot of people this way and I had tons of fun.”