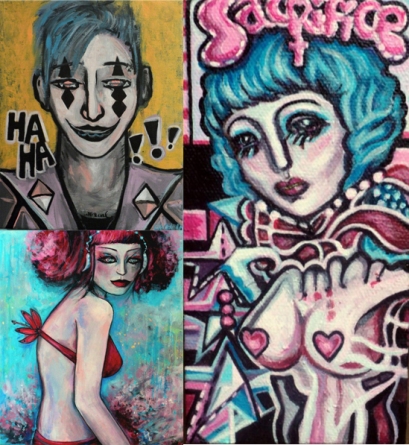 At a Photoshop convention in Las Vegas, 250 photographers flash pictures of a model for 6 hours. Her whole body has been airbrushed with designs, her eye sockets are blackened, and she looks like an alien. This is a typical day in the life of Lächeln, a full-time freelance model who is also an artist, stylist, blogger and musician. She’s buzzing on Buzznet, exploding on the Internet and giving Hollywood IT girls a run for their money.

At a Photoshop convention in Las Vegas, 250 photographers flash pictures of a model for 6 hours. Her whole body has been airbrushed with designs, her eye sockets are blackened, she’s wearing head gear and she looks like an alien. Although she’s been on her feet for hours, she still continuously changed poses every minute to stay fascinating to the photographers. When she was done, she was exhausted but the client was thrilled. This is a typical day in the life of Lächeln, a full-time freelance model who is also an artist, stylist, blogger and musician. She’s buzzing on Buzznet, exploding on the Internet and giving Hollywood IT girls like Audrey Kitching, Raquel Reed, and Mosh a run for their money.

Lächeln, or Luxbot Lächeln as she’s known online, is sought after by innovative photographers with a creative concept. She’s on the road 50-80% of the time but she loves the unexpected.  “I’ve been covered in mud, had syrup poured on my head, I’ve been a vegetable painted with silver pigment, I’ve been drenched in blood, tied up, hung upside down from the ceiling and one photographer even had me hanging out of a skyscraper in high heels,” she laughs. “I never know what persona I will be or what adventure will come next.”

In some photos she looks like the half Asian beauty she is; in others she looks Mexican, Armenian or just plain American. Her multicultural appeal and myriad of different looks, poses, and expressions leave a lasting impression on those who see her.

“I’ll never forget the first time I was introduced to her pictures. I was left speechless to be honest with you. And it was much more than her beauty, I thought she had serious talent. Good looks are a dime a dozen,” says Brad Thomas who has worked with Lächeln.  “Anyone who has personally met Lächeln will understand she’s a natural beauty with an addicting energy that you feel in her presence and in her pictures. I tell people she’s a beautiful chameleon. Regardless of what she’s trying to portray, she adapts and turns it in to a work of art that you have a reaction to.”

Lächeln knows what she’s doing. She has been modeling since she was 12 when her grandmother, an oil painter and art instructor, needed someone to model for art classes. Now Lächeln models full time doing gigs for concept photography, alternative modeling, fashion modeling, beauty modeling, glamour, and music videos.  She can do her own hair, make up and styling. And she’s expert at it. She can even bring her own amazing wardrobe, or she can wear what she’s given and make it look like it has never looked before.

Brad Thomas, an experienced entrepreneur, musician and e-commerce developer, founded his latest venture, TallCat.com, “to bring all the creative energy in the world to one place for everyone to experience.” If anyone understands creative people, he does. He met Lächeln along the way and has become one of her most ardent advocates.

“Her modeling, it’s not just a picture, it’s a work of art that releases an emotion which affects the viewer… exactly what art is supposed to do,” Thomas explains. “From pink to black hair, from crazy off-the-wall outfits to basic dresses and attire, she takes what would be an ordinary modeling picture and turns it into a form of artistic expression that viewers want to talk about.”

Jamais Vu, a photographer and artist in Hollywood said, “Lächeln has that ‘it’ factor. She is easy-going with a fun and kind personality. She is rockstar without the massive ego.” When asked what made her different, Jamais Vu explained, “She is open-minded and a free spirit. She is like a glass of refreshing water on a hot day. She is not afraid of letting go and being herself.”

Indeed, Lächeln is not just another pretty face.  As the oldest child in a group of nine siblings from Houston, Texas, she learned to be independent and to think for herself at a young age.  Her parents are both engineers who stressed education, and bright she is. Lächeln is currently reading four books – 33 Strategies of War, Video Night in Kathmandu, Just Kids, and Lolita.  “When I was younger, my mom was worried that I read too much,” said Lächeln. “But since my grandmother was an art instructor, I also developed a love of art.”

Lächeln started painting when she was just seven years old. She has taken countless oil painting classes and she paints 4-5 times a week to express emotion and ideas. Her inspirations are Frida Kahlo, Yayoi Kusama, Gustav Klimpt among others. Her artwork is primarily expressionistic portraiture.  And people buy it. Recently, a patron who already has some of Lächeln’s art on his walls commissioned her to do another painting as a gift for his son.

Thomas says, “Being an entrepreneur, I understand the value of hard work and risk. In many ways we are in the same boat. She’s trying to grow a career in the creative arts (modeling, acting, art, music), I’m trying to launch a new online community for creative and talented people to showcase their abilities. And we are both attempting it in the worst economy the US has ever seen. Some call it brave, some call it insanity…I think it’s maybe a little bit of both.”

“I think she is on the cusp of really coming into her own. I look forward to her art over the next few years. She is garnering the maturity and wisdom she needs to hone her talents into a deadly weapon,” said Jamais Vu.

When she’s not on the road modeling, she lives and works in a creative studio space in Phoenix, Arizona with her roommate, a latex fashion designer. Her home is filled with fashion, art supplies, musical instruments and artwork.

Although her busy modeling career caused her to slow down on the music, she continued to play piano, guitar, and sing whenever she could. Now she’s making music her priority. In fact, she’s going into the studio to work on her debut album, teaming up with dance music veteran Tolga Katas, as well as other up-and-coming producers and writers. “She’s the entire package, she has hungry fans, she’s got a good tone and a great attitude,” says Katas. “Musically, she’s fun to collaborate with.

Recently Lächeln experimented with working at a normal job so she could stay home more and have more time for her passions. “After one day, I was miserable. I knew a normal job was not for me and I said F** this!” she laughs. “I realized how lucky I am and how much I love what I do.”

“Very few people her age have the drive Lächeln has. Heck, very few people at any age,” Thomas continues. “We live in a world of instant gratification and entitlement where people seem to have forgotten that good things take time and lots of effort if you want to see a positive outcome. If you know Lächeln personally, you will see and understand the hard work and sacrifice that she puts into things. I admire that. Even my mom is one of her biggest fans.”

On her way back from a modeling gig for Comedy Central on the red carpet in Hollywood, she texts a progress report to Tolga Katas who is overseeing Lächeln’s debut album and also helping manage Luxbot Lächeln’s career. She lets him know she’s safe and that she’s anxious to get in the studio to record the vocals to a new track he produced just for her to write to. “I’m excited about her future, she’s rocking” says Katas. “Everyone wants to know who she is.  She’s a star, that’s for sure.”