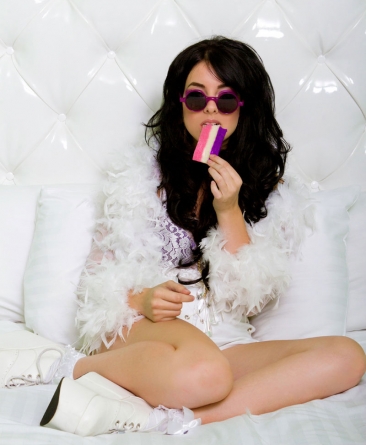 Pop artist Lola Blanc recently unleashed a couple of her latest songs online. As a result, she’s been “electrocutied.” No, that’s not a typo. It’s the new term for getting written about on the New York-based Electrocutie music blog. With a new name, new sound, and new digital brand starting to take root, Lola Blanc is just beginning to pop. Make that electro-pop.

Lola Blanc, the artist formerly known as Kandice Melonakos, has given us a glimpse into her new music direction with her latest songs on Soundcloud and Youtube. In response to the song “You Like Me,” Lola Blanc  got “electrocutied.”  No, that’s not a typo.  That’s cutie, as in cutie pie. That’s the new term for getting a thumbs up from New York music blogger Erica Russell, the creative force driving the Electrocutie blog.  Erica is a freelance writer and college student from NYC who is studying communications and she blogs about electro, synth-pop, techno, electronica, dance-punk music.

“a twinkling synth-pop intro, Lola cooing ‘la la la’ atop the beats as they build’  before the track explodes into a heavy wobbling dubstep drop.  The lyrics of the song include Lola listing off all her less attractive habits (“I’m demanding, I’m stubborn, my makeup’s all running!”) and singing, “But you really, really like me.

Another blogger named Gorno wrote about Lola’s beauty. “With a sultriness very much like a young Rose McGowan, her cool voguish looks ensure this Greek Hottie is set for plenty of attention,” Gorno wrote. If her talent doesn’t make you fall in love her, her beauty will.

As a total stranger walking into a casting call in Hollywood, Lola was cast as a featured or lead actress in several projects, including other artist’s music videos.  Ever hear of Interpol? Chrissie Hynde? KD Lang? How about the band LFMAO and their wildly successful smash hit “I’m Sexy and I Know it.” The video has over 171 million youtube views.

Lola Blanc is the hot girl with the black ripped pants.

Her personal fashion style was discussed in Starpulse, she’s the pretty girl who slaps the guy in the elevator on the national Cosmopolitan commercial, she’s smarter than a whip, is obsessed with shoes and fashion and is a featured pop culture blogger on Buzznet.

That makes her the big three: intelligent, talented and beautiful. She’s not a triple threat, though. She’s more like a triple scoop banana split with lots of toppings to choose from.

Erica describes Lola as the –

“colorful raven-haired beauty that is absolutely going to be your new favorite electro-poppin’ electrocutie. The Los Angeles based pop up-and-comer debuted a new electro-pop track called ‘You Like Me,'” she wrote, “and it is instantly infectious! ”

The song was produced by the highly-respected German production team, Famties, and co-written by Lola Blanc and CC Sheffield. Erica describes the track as “sweet and sticky all at once, with sparkly synths, dirty drops, and bubbly beats that play well into the playful tone of the song.”

On that note, here’s the song. “You Like Me”