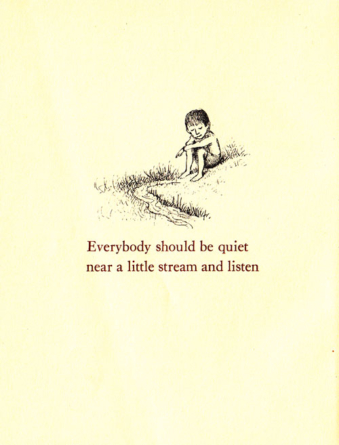 “Boredom … protects the individual, makes tolerable for him the impossible experience of waiting for something without knowing what it could be.”

When was the last time you were bored — truly bored — and didn’t instantly spring to fill your psychic emptiness by checking Facebook or Twitter or Instagram? The last time you stood in line at the store or the boarding gate or the theater and didn’t reach for your smartphone seeking deliverance from the dreary prospect of forced idleness? A century and a half ago, Kierkegaard argued that this impulse to escape the present by keeping ourselves busy is our greatest source of unhappiness. A century later, Susan Sontag wrote in her diary about the creative purpose of boredom. And yet ours is a culture that equates boredom with the opposite of creativity and goes to great lengths to offer us escape routes.

Children have a way of asking deceptively simple yet existentially profound questions. Among them, argues the celebrated British psychoanalytical writer Adam Phillips, is “What shall we do now?” In an essay “On Being Bored,” found in his altogether spectacular 1993 collection On Kissing, Tickling, and Being Bored: Psychoanalytic Essays on the Unexamined Life (public library), Phillips writes:

Every adult remembers, among many other things, the great ennui of childhood, and every child’s life is punctuated by spells of boredom: that state of suspended anticipation in which things are started and nothing begins, the mood of diffuse restlessness which contains that most absurd and paradoxical wish, the wish for a desire.

Illustration by Maurice Sendak from ‘Open House for Butterflies’ by Ruth Krauss. Click image for more.

Phillips, of course, is writing more than two decades before the modern internet had given us the ubiquitous “social web” that envelops culture today. This lends his insights a new layer of poignancy as we consider the capacity for boredom — not only in children, though especially in children, but also in adults — amidst our present age of constant access to and unmediated influx of external stimulation. This is particularly pause-giving considering the developmental function of boredom in shaping our psychological constitution and the way we learn to pay attention to the world — or not. Phillips writes:

Boredom is actually a precarious process in which the child is, as it were, both waiting for something and looking for something, in which hope is being secretly negotiated; and in this sense boredom is akin to free-floating attention. In the muffled, sometimes irritable confusion of boredom the child is reaching to a recurrent sense of emptiness out of which his real desire can crystallize… The capacity to be bored can be a developmental achievement for the child.

Because of how profoundly our early experiences shape our psychoemotional patterns, it’s inescapable to contemplate how this translates into our adult capacities. How easily and uncomfortably the phrase “modern adult” can replace every mention of the child in the following passage from Phillips’s essay:

Experiencing a frustrating pause in his usually mobile attention and absorption, the bored child quickly becomes preoccupied by his lack of preoccupation. Not exactly waiting for someone else, he is, as it were, waiting for himself. Neither hopeless nor expectant, neither intent nor resigned, the child is in a dull helplessness of possibility and dismay. In simple terms the child always has two concurrent, overlapping projects: the project of self-sufficiency in which use of, and need for, the other is interpreted, by the child, as a concession; and a project of mutuality that owns up to a dependence. In the banal crisis of boredom, the conflict between the two projects is once again renewed.

It is unsurprising then, Phillips notes, that the child’s boredom evokes in adults a reprimand, a sense of disappointment, an accusation of failure — that is, provided boredom is even agreed to or acknowledged in the first place. In a certain sense, we treat boredom like we treat childishness itself — as something to be overcome and grown out of, rather than simply as a different mode of being, an essential one at that. Phillips adds:

How often, in fact, the child’s boredom is met by that most perplexing form of disapproval, the adult’s wish to distract him — as though the adults have decided that the child’s life must be, or be seen to be, endlessly interesting. It is one of the most oppressive demands of adults that the child should be interested, rather than take time to find what interests him. Boredom is integral to the process of taking one’s time.

That, perhaps, is what Cheryl Strayed alluded to so beautifully nearly twenty years later, when she wrote that “the useless days will add up to something [because] these things are your becoming.”

Illustration by D.B. Johnson from ‘Henry Hikes to Fitchburg,’ a children’s book about Thoreau’s philosophy. Click image for more.

Phillips goes on to consider more directly the evolution of boredom from childhood into adulthood:

As adults boredom returns us to the scene of inquiry, to the poverty of our curiosity, and the simple question, What does one want to do with one’s time? What is a brief malaise for the child becomes for the adult a kind of muted risk. After all, who can wait for nothing?

We can think of boredom as a defense against waiting, which is, at one remove, an acknowledgement of the possibility of desire… In boredom, we can also say, there are two assumptions, two impossible options: there is something I desire, and there is nothing I desire. But which of the two assumptions, or beliefs, is disavowed is always ambiguous, and this ambiguity accounts, I think, for the curious paralysis of boredom… In boredom there is the lure of a possible object of desire, and the lure of the escape from desire, of its meaninglessness.

Boredom, I think, protects the individual, makes tolerable for him the impossible experience of waiting for something without knowing what it could be. So that the paradox of the waiting that goes on in boredom is that the individual does not know what he was waiting for until he finds it, and that often he does not know what he is waiting… Clearly, we should speak not of boredom, but of boredoms, because the notion itself includes a multiplicity of moods and feelings that resist analysis; and this, we can say, is integral to the function of boredom as a kind of blank condensation of psychic life.

Lamenting that we tend to treat boredom as a handicap and to deny it as an opportunity, Phillips cites the story of “a precociously articulate eleven-year-old boy” who was once a patient of his, brought in by a mother who believed her son was “more miserable than he realized,” in large part due to his “misleading self-representation.” Phillips found that this superficial self, which the boy donned as a shield for disapproval, was largely tied to the experience of boredom. Once again, Phillips offers a passage all too intimately applicable to the modern human condition beyond just childhood:

[The boy] was mostly in a state of what I can only describe as blank exuberance about how full his life was. As he was terrified of his own self-doubt, I asked him very few questions, and they were always tactful. But at one point, more direct than I intended to be, I asked him if he was ever bored. He was surprised by the question and replied with a gloominess I hadn’t seen before in this relentlessly cheerful child, “I’m not allowed to be bored.” I asked him what would happen if he allowed himself to be bored, and he paused for the first time, I think, in the treatment, and said, “I wouldn’t know what I was looking forward to, ” and was, momentarily, quite panic-stricken by this thought.

Phillips directed the treatment toward the boy’s “false self” and his belief that being good, by the token of his mother’s approval, meant having lots of interests that didn’t leave room for the vice of boredom. Over the course of the following year, Phillips helped the boy develop his capacity to be bored. He recounts:

I once suggested to him that being good was a way of stopping people knowing him, to which he agreed but added, “When I’m bored I don’t know myself.”

Illustration by from ‘The Hole’ by Øyvind Torseter. Click image for more.

This, I think, is how we as grownups in the modern world often go through life. Our version of being good is being productive. Choosing constant distraction or busyness — two sides of the same coin — we seek to avoid not boredom and passivity, but end up robbing ourselves of presence, because presence presupposed a detachment from what we look forward to, what is to come, and a mindful groundedness in what is.

This is the cultural pathology of our time: If we stopped doing what we do, we might not know who we are. As I’ve reflected before, to cultivate the art of presence in the age of productivity is no easy feat.

On Kissing, Tickling, and Being Bored is a beautiful and psyche-stretching read in its entirety. Complement it with this cultural history of boredom, then revisit Phillips’s fantastic conversation with Paul Holdengräber on why psychoanalysis is like literature for the soul.