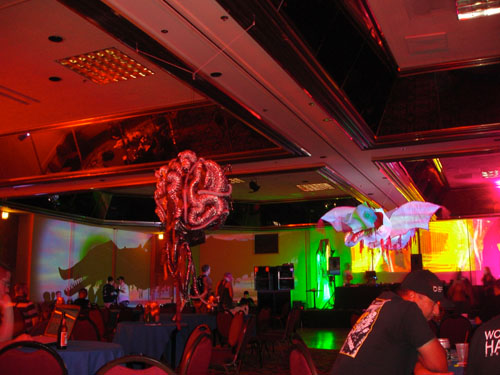 So while I was walking around looking for creative hair, I saw a mop of dreadlocks swinging down way down the hall. Off I went running after them. “Excuse me sir,” I said huffing and puffing. “May I take a picture of your hair from the back?” As if that was a perfectly normal request, he said, “Yes, of course.” His name was Zebbler, originally from Belarus, Europe.  He came to the US in 1996 as an exchange student.  I was curious why he was in Las Vegas. “Things got hairy in my country, so I applied for asylum and got it in 2000,” he explained, accent free.  “I’ve been living in Boston since 1996. I am in Vegas because I’ve become acquainted with Scott from Glitch.fm who mentioned that he might need some deco work for his party room at Defcon 18.  I was the right fit, I suppose.” He then escorted me into one of the rooms with loud music, VJ’s, lights, video and decorations to show me his creative work. While the music played, video was being projected onto a white canvas dragon that was suspended from the ceiling. The teeth were even LED lights.

I asked Zebbler to explain how he got into this.

I’m a pretty established VJ and video artist.  But I get bored with a regular “project on a flat screen” thing.  So I like doing sculptural projections lately, where I map out my videos to fit a variety of shapes, or some architectural environments of the party space.  For this project I collaborated with my friend Kate Van Rees.  Together we designed a giant dragon and projected it’s “video skin” on the custom made projection surface from both sides with relatively bright 4,000 lumen projectors.  The shadows were also taken into account – I added some flames to the edges, so it looks like the shadow of the dragon is breathing fire.

What is your background?

“I went to art school in Boston for video and show production (Mass College of Art, SIM department).  I’ve done well over 200 VJ shows around US, toured the country several times with acts like Ozric Tentacles and Shpongle.  I have my own a/v bass heavy dance floor act called Zebbler Encanti Experience (zebblerencantiexperience.com). I do a lot of video and cause a lot of trouble (see http://www.vimeo.com/4722287 )”

What do you call this form of high tech artistic expression?

I don’t know to be honest.  New Media would be an art-school-accepted term. I am mainly a VJ.  But I also DJ.  And I do installations.  Where I use video to bend itself around shapes and objects.  What does that make me?  Mostly an entertainer.  A little bit of a techno-shaman. I ask how the market is for the techno-shaman industry, and he explains. It varies.  I became the official VJ for Red Bull North America a few years ago.  Toured US for them.  Then things hit the economic depression and all the jobs disappeared.  But I am stubborn as hell and I love what I do.  So people find me when they need good art or their party audiences to be entertained.  That’s what I am here for.

This is what pickled electronics look like when balanced on a head of dreadlocks.

They were centerpieces in the club room.

Zebbler made this decoration too. It is a brain with eyes. It’s hanging like a pinata staring into spacing.

“Easiest way to follow me,” he said, ” is actually through my email list, which you can easily find on www.zebbler.com But you can find me anywhere, I am ubiquitous. ;-)”