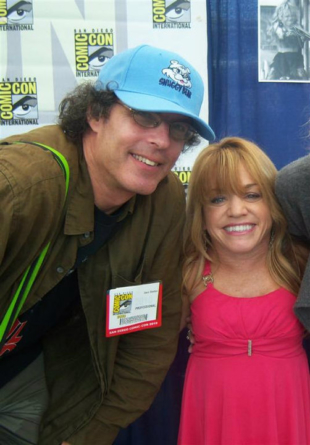 Dave Shelton, an award winning writer, cartoonist and voice actor, made his appearance at ComiCon without his latest furry character, Snuggy Bear©. By the way, he’s giving away 5 free passes good for today, Sunday, July 25, at the San Diego Convention Center. For more info, see below. Dave Shelton is extraordinarily accomplished in and beyond the world of cartoons. As the former senior writer and head of cartoons at National Lampoon, he put out two best-selling cartoon collections and handled the writing and cartooning for the flagship magazine.  He created the popular Hackidu characters for Everybody Loves Raymond. He illustrated several popular children’s books including Bellaboo, the Purple Princess written by General Hospital star Nancy Lee Grahn and The Lemming Shepherds, now being distributed throughout China. In fact, his cartoon work is part of the Charles M. Schulz (Snoopy) museum in Santa Rosa, California and the Haig Museum of Cartoons in New York. And the list goes on.

Dave Shelton’s creativity also takes other forms. He’s a screenwriter, director, animator, TV show creator, film maker, and song-writer. He wrote the theme song for Special Olympics, which named several of their teams after Snuggy Bear©. He is the former song writing partner of the late Albert Hague (Fame, How the Grinch Stole Christmas).

Most recently, however, he’s the creator of the upcoming kids television series Snuggy Bear and the T-Shirt Kids© (www.snuggybear.com) which has already achieved world-wide attention and multiple brands of merchandise.

Now, about those ComicCon passes? Hit him upon facebook. Better act fast!