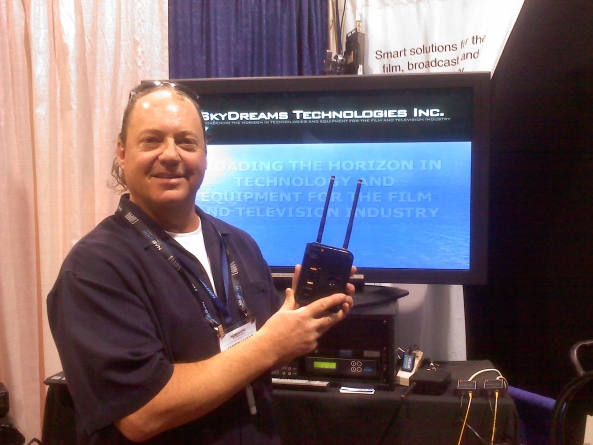 NAB is a big event to people in the broadcasting industry. It’s where the mover, shakers, inventors, suppliers, buyers, broadcasters, content developers, software engineers, video technologists and onlookers converge to network and advance their objectives. Some companies have booths, some executives have to travel far, and some work all year to announce their new product at this event.  So what is NAB anyway?

On the NAB web site it states:

“The National Association of Broadcasters is the voice for the nation’s radio and television broadcasters. As the premier trade association for broadcasters, NAB advances the interests of our members in federal government, industry and public affairs; improves the quality and profitability of broadcasting; encourages content and technology innovation; and spotlights the important and unique ways stations serve their communities.”

Below is how I captured the event from my perspective – with my little cell phone.

Our house is a geek bed-and-breakfast during tech conferences.

And by the way, this is what a satellite engineer looks like when crashed. He’s also a storm-chasing uplinker.

In another part of the house, the piece of clothing on the couch tells me I should not go around the corner.

Chris Geerdes might look like a Marlboro man when he’s doing news feeds for the associated press,

but he still chose to use my pink princess cup for his morning coffee. After a late night dinner, he stayed up and did all the dishes.

So he was tired in the morning.

Shane Saxon on the other hand was one video engineer and software developer who was up and ready early to head back to NAB.

These smart, beautiful ladies stayed here one night as well. Cobie Cavanaugh is a former fire chief and Susan Monroe

is a satellite truck and camera operator for News 4 in Los Angeles.  Note that they are holding my princess Bambi during breakfast.

Cameras, sets, lights, audio equipment, software, music, stock footage, 3D, televisions, speakers – everything imaginable related to television or radio broadcasting (including online) was there.   This photo is a set that enabled conference attendees to evaluate the quality of the cameras.

On the right is Les, part of the Big Freeze camera crew. The Big Freeze is a 360 degree camera array with synchronized Nikon cameras.

Click on “effects” and prepare to wish you could afford this.

A British inventor who customized his state-of-the-art video server to look like a retro calculating contraption.

Here it is up close. It was so beautiful/ugly/fascinating that people would stop and gawk.

GPS / atomic synchronized SMPTE time code generator, and more. I am going to write an article about him on Technorazzi soon.

Funny man Travis McFarland was at the house to help out too.