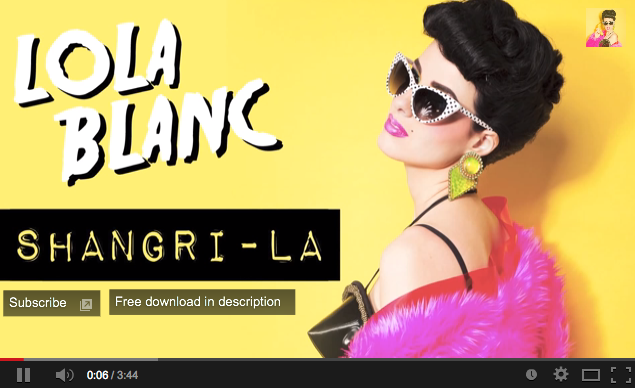 Lola Blanc dropped a buzz track for her fans, and she reaches some pretty high notes. The raven-haired singer and songwriter continued to craft mischievous, unapologetic pop while in Hollywood, infusing her music with a bold, playful edge that defines Lola as an artist.

Eventually, Lola’s fierce artistic vision and colorful songwriting caught the attention of the leading hit-makers of the music industry, setting her firmly on the path to becoming the next big female breakout artist. She recently premiered her debut music video “Bad Tattoo” via Ryan Seacrest and co-wrote “Ooh La La” off the Smurfs 2 soundtrack for Britney Spears.

Born in Germany to a mother who was a creative whirlwind and father who was in the CIA, Lola’s life has been unconventional since the beginning. After leaving Europe, she moved to a farm in Michigan with her family, performing as a ventriloquist (true story!) and auctioneer as she pursued her passion for music by writing songs. After overcoming a whirlwind of obstacles including poverty, Lola moved to LA where she worked her way up, writing with other musicians, modeling, and landing roles in music videos for high profile artists like Interpol and LMFAO.