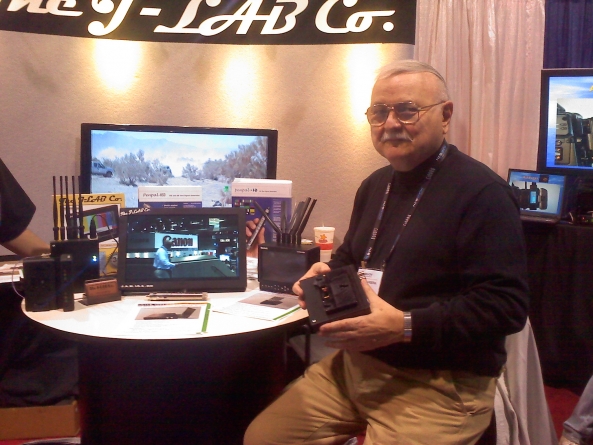 The legend might deserve a little shut eye after exhibiting at his 32nd consecutive NAB. His small booth next to Panasonic at NAB is a hub of activity as friends and engineers stop by to talk to this brilliant and renowned innovator. Jerry invents high quality, battery-powered displays, custom camera equipment and and a plethora of useful time-saving/space-saving/money-saving devices for field news gathering. His colleagues tease that they wouldn’t be surprised to read “Panasonic Conglomerate Lays Off Entire Engineering Staff to be Replaced by One Man” in the trades. Apparently, Jerry is the go-to guy for digital video hardware solutions. His knowledge is extraordinarily accurate. “He is like a walking reference book for digital video information and solutions. His reputation is that of 100% reliability and that his stuff works and it works every time,” says Chris Geerdes, satellite engineer

“Jerry is by far the most feared and respected digital video engineer in the West,” says Cyberpunk Tarzan who refused to use his real name for “fear of loss of access to his future technologies, serious injury, and/or death.” David Schultens, a notable video engineer in his own right, says “He brought the world a production truck without wheels – in a briefcase – powered by 12-volt solar. Now that’s efficient! Jerry is a one-man band.”

Here’s a geeky piece of a description from his web site J-Labs.com:

Seven individually timeable black burst outputs are produced by the CFS-1. Six of these provide the genlock video signals required by the input devices (cameras, etc.). The remaining black burst is available on a BNC for other uses. The LCD Monitor Bridge, with LED tallies, and Hamlet™ waveform/vector device complete the “video truck in a case” concept. Multi camera setup is accomplished in minutes rather than hours, as cameras can be equalized and timed as fast as they can be connected and powered.

See what I mean?  Check him out.