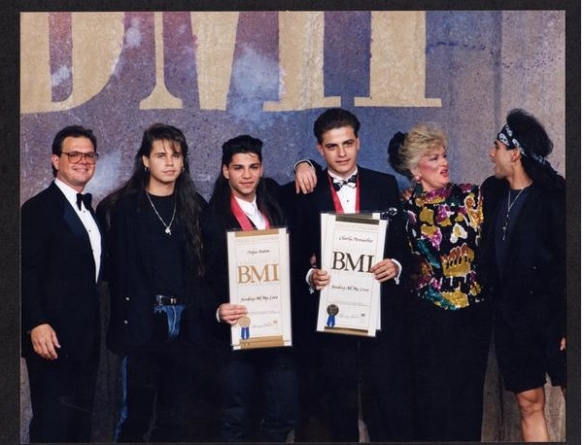 Tolga Katas was conceived in a palace and was born on June 5, 1966 in Istanbul, Turkey to Erol and Nursal Katas. At the time, Erol was an interior designer for palaces and elite hotels around Europe and the Middle East. To this day he is internationally recognized as the “king of designers” and “designer to the kings.”

He succeeded.  By age 19, Tolga Katas was a self-made man. He began his career as a rock singer, then left the spotlight to become a behind-the-scenes independent record producer and promoter.  Tolga was a pioneer in digital music in the Miami dance music scene and was one of the first to create a hit song entirely with music made on the computer. He launched artists such as Stevie B and Linear with his own unique sound which evolved into what is now known as “Freestyle Music.”

Tolga wrote and produced Freestyle smash hits such as “Sending All My Love,” “Party Your Body,” “Spring Love,” and countless other chart-topping songs. He won the BMI Song of the Year Award and was nominated for the songwriters Hall of Fame.

While Tolga Katas is credited with being one of fathers of Freestyle Music, he is also considered a legendary dance and pop producer from the 80’s and early 90’s who learned to custom-tailor his music to serve the needs of DJ’s. As a result, Tolga created multi-platinum selling artists through his record labels Futura and Summit Entertainment.

With the onset of MTV, Tolga was soon led into the world of media and network development. He began producing music videos, commercials, and other shows, and learned every aspect of production from lighting to editing to color correction to 3-D motion graphics to visual effects.  Soon, he was running production for the Caribbean Satellite Network which was later bought by BET.

In his short time there he gained vast experience in the multi-faceted aspects of running the technical and creative sides of a television network.  In addition to countless music clients, Tolga’s production clients and credits include BET, Warner Brothers, Cedric the Entertainer, Journeys in Black, The Visual Effects Society Awards, Nicole Lenz, S Networks, AAA, KPAL TV, The Gingerbread House, and more.

Tolga’ penchant for mastering the use of complicated software led him into becoming one of the foremost software developers of our era, specializing in digital entertainment. He developed and launched one of the first financial web sites, DayInvestor.com which tracked around 15 million unique visitors a month.  He created the first online craps software, cutting-edge media delivery software, Internet video applications, special effects software, games, desktop applications too numerous to list.