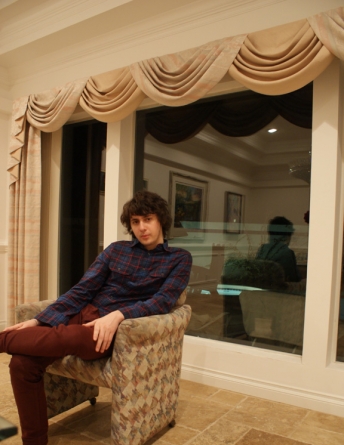 You thought your bank fees were high? On the day Emerson Melonakos turned 18, he walked into a local bank and opened his first checking account. He was given an ATM card, temporary checks and told how checking accounts work. What he they didn’t tell him was that within hours, he would be nearly $1 million in debt.

Melonakos and his room mate Travis McFarland decided to grab a meal together. Needing only $20 cash, Melonakos stopped by an ATM to withdraw cash for the first time. Instead of dispensing cash, the ATM produced an error message: he was in the red by, oh, just a mere -$870,000 in the negative.

Melonakos asked MacFarland to look at the account balance on the screen. MacFarland confirmed Melonakos’ worst nightmare. “It says you are $870,000 in the hole, dude.”

“That’s what I thought. How is this possible?” Melonakos asked. He had deposited money and had not used his account once.

“Didn’t they prepare you for this during your new customer orientation?” joked MacFarland, a comedian by trade. “Welcome to adulthood in America. It comes with automatic debt.”

Unsure as to what went wrong, Emerson Melonakos made a phone call to a friend in the Hollywood hacker community and within minutes the news was buzzing. “It must have just been a computer glitch,” said John Draper. “No doubt it will be fixed tomorrow.”

“What a birthday present,” said Tolga Katas. “I told him to take a picture of his account balance and get a receipt to show the bank in the morning.”

“I got a two calls after midnight about this,” said Technorazzi founder, Christine Marie. “We had someone on the story within minutes.”

MacFarland treated Melonakos to a meal at Bob’s Big Boy, the bank corrected error the next morning and apologized for the technical glitch, and Emerson Melonakos has taken it all in stride. Melonakos is still planning a career in investment banking and has not been dissuaded by his traumatic first banking experience. In fact, he now takes his accounting class more seriously and has yet to miss a point. Travis McFarland, a comedian who currently performs at The Independent in downtown Los Angeles, recently won the PeeWee Herman Award for being the funniest comedian of the night. No joke. He is being nominated by Technorazzi to receive the Midnight Meal Replacement Award.

email your tips or stories to editor @ technorazzi.com