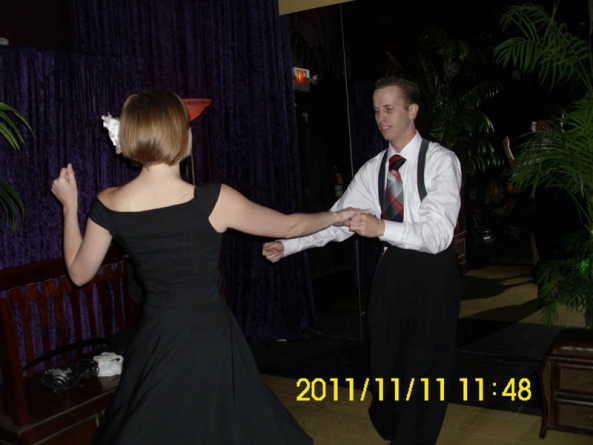 A video was projected onto the building.

Video projections on the inside walls of this gorgeous venue added a spectacular, personalized touch.

The wedding ceremony began with a performance by an aerialist who was like an angel dancing in the air with wings of silk. This stunning performance added a  elegance, extravagance and class that somehow both shocked people, and yet seemed perfectly fitting.  A television crew for “Las Vegas Weddings” was there filming the wedding  (described as “Bohemian meets Moulin Rouge,” with a geeky, storybook & Turkish twist.)

When the velvet curtains for the bridal procession were opened, famed hacker Kevin Mitnick, a resident of Las Vegas and friend of both bride and groom, walked the bride down the aisle.

Kevin stood in place of the late L.V. Charles Besemer, the father of the bride.  Steve Wozniak, the almost-best man, had to be best-man-in-spirit, due to winning an international technology award.

The Pastor was Pastor Ed of Casual Elegance.  In his prior life, he was an engineer – the  perfect wedding officiant for a geeky couple.

Happiness after the ceremony.

Software developer Kevin Postal and his creative genius, geek-positive girlfriend, Annie Dorgan, joined in the celebration, along with Adam Kegg Powell (seen in back.)

The Katas family contributed, among other things, Turkish delights.

Duygu (Tolga’s stepmom) and Dorothy (Christine Marie’s mom) seemed to get along famously.

On the far right is Ali, then Oksan, then Ali’s wife Ayla. Ali is Duygu’s brother, Tolga’s uncle.

Bambi was the official flower dog.

Bambi had her own wedding dress and veil, and of course – she had her nails done too. “This was all find and good until I couldn’t find her, and ironically, Dan Sokol took a photo of her and sent it to me with a ransom note, as a joke,” says Christine.

Presents from Turkey!  They pin gold on the bride and give special jewelry too.

Model Luxbot Lacheln and Bebe Zeva with the bouquet caught by Bebe.

Keeping with Turkish tradition, there was a belly dancer at the reception.

Ginger got the girls on stage and they belly danced like pro’s!