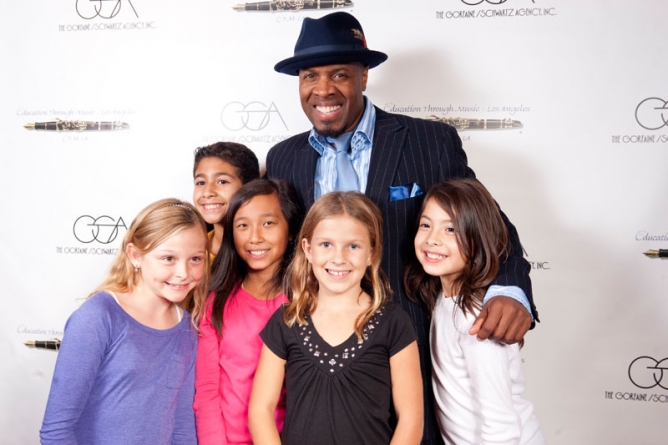 Celebrity  musical director Michael Bearden never rests for a minute. Although he is best known as the long-time musical director for the world’s biggest superstars – Michael Jackson and Madonna – Michael uses his talents in other ways as well. Primarily, to make a difference. He’s a philanthropist. In the past few weeks, not only has he spent significant time helping building the Believe Foundation which promotes the use of music to enrich education and help children, but he also participated in a benefit concert to help raise money for Cops 4 Causes. Proceeds went to “Returning Heroes” and “Fallen Heroes Fund” for families lose a law enforcement member in the line of duty.  Additionally, Michael and his band Solace joined other stars at the House of Blues to contribute  to Education Through Music LA (ETM-LA) for the 6th annual ETM-LA benefit.

Michael Bearden, former Musical Director for Michael Jackson’s “This Is It,” and his killer band, Solace, backed a group of young musicians and singers who have been recipients of ETM-LA programs over the years.  Solace entertained the festive crowd late into the evening, long after the student musicians who performed earlier in the show were back home and tucked into their beds. ETM-LA web site

Keeping in the holiday spirit, Michael also shared his talents at “Christmas in Washington, 30 year old holiday tradition attended by the president and first lady that benefits the Children’s National Medical Center. It was a star-studded concert hosted by Conan O’Brien with performers like Justin Bieber, Cee Lo Green, Jennifer Hudson, Victoria Justice and others.

Michael Bearden was the principal keyboardist for the orchestra. This is his 5th year contributing.