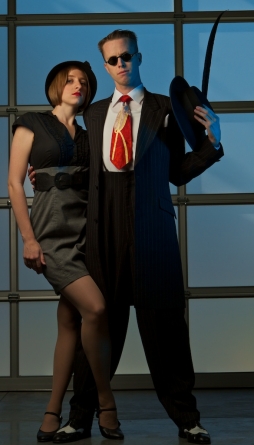 If you were to happen upon him at Disneyland, you might think, “Wow. Disney hired a model that channels a young Val Kilmer and dances like Fred Astaire.”

But you would be wrong. He wasn’t hired. He does it for fun. When super geek Trevor is not troubleshooting technical problems, reconfiguring servers, innovating commercial solutions for eReading, or analyzing video quality until he’s bleary-eyed, he and his girlfriend Kristen dress up in vintage attire and swing dance together at Disneyland. Just to de-stress.

As a former Marine who served in Iraq as infantry on the front lines, Trevor knows all about stress. He credits his boot camp days with helping him learn to handle it.

“On my leave from boot camp, I discovered that there were people my age who dressed up and danced every Saturday at Disneyland. I decided that was what I wanted to do in my free time rather than go with the other Marines to strip clubs and bars,” Trevor explained. “And it was much more exciting than going home. It is something that kept me from going insane in the military.”

Even though he had a stack of technical certifications that made him tech-job-marketable, his patriotism drove him to join the military to “service to my country in ways other than just paying taxes and voting. I also wanted to experience something other than being a geek, the reason why I picked infantry over a tech job,” he said.

His interest in technology started when he was very young. “It was a way for me to interact with my father, since he was

working most of the time. However, when I did get to see him he’d be debugging lines of code usually printed out on reams of paper several inches thick with a pen and highlighter,” he continued. “At times he’d show me what things meant or teach me commands to send through the dumb terminal at the mainframe in his office.” When Trevor was in elementary school he had access to Apple II and Macintosh machines both at home IBM compatibles and through dial-up access to mainframes he worked on. He learned that the ProDOS BASIC language was very similar to the BASIC he was learning on Microsoft DOS.

Trevor started writing his own programs to help him do his math homework. He even learned to line print it with columns and rows exactly how the teacher wanted it turned in. It didn’t occur to him that it was unusual for a child so young to be porting between two different platforms, or that it was extraordinary for a second grader to be building applications to cheat his homework. To him, he was working on computers just like his dad. And it was far more fascinating than his class mate’s etch-a-sketch.

Dumpster diving is a broad term that can cover freeganism, or the act of avoiding ecological impact by living exclusively from dumpster-derived goods such as those who go to the back of a grocery store to acquire foodstuffs that may not be bad yet, but has exceeded the ‘sell by’ limit. However, I use dumpster diving as a source of finding new toys to play with. I use the term because sometimes quite literally I have to jump into a garbage bin to find something useful, however most of the time it’s not that romantic. Typically I find things like computers, electronics, manuals, etc. are still in the process of being discarded, and manage to save them from their fate.

Things that would normally have cost several hundreds to tens of thousands of dollars when new, I can just place in my car, dust off, plug in, and go! This has been the fuel for my interest in technology and enabled me to experiment more from a very early age, to do things people wouldn’t dare do to their own electronics and computers. I have found everything from old Apple II computers to Jet Direct print servers and everything in between.

When asked about his favorite finds, he states, “I don’t really have one, every find is different, useful, and exciting. I get such a great chemical response in my brain from this activity. I just saddens me I haven’t had the time recently for it.” On that cue, Technorazzi issued him a challenge to go dumpster diving and report back in 6 hours. Two hours later he sent a picture message from his mobile phone. Success! To him, that piece of hardware was a better trophy than a 12 point deer to a deer hunter.

Only a fun-loving, adventure-seeking hacker would be delighted and proud to climb into a garbage bin to rescue and recycle something with wires in it. Perhaps that’s

why myriads of hackers are drawn like magnets to hacker conventions. They get to share their talents and exploits, to appreciate each other, to feel understood. Trevor started attending DefCon on a hiatus from the military. He began competing in contests at such as CTF, openCTF, and the now-world-famous Scavenger Hunt.

“I’ve played MVP for three of the 4 winning years of the Scavenger Hunt. Yet I’ve never received the coveted ‘Black Badge’ which disturbs me,” he confessed with a smile. This year, however, he has been asked to help in hosting the openCTF game at DefCon 18 in Las Vegas this summer.

When I’m alone, it’s usually just researching, pulling apart something I just got, pulling apart two things to make one better thing. When I’m with friends, usually this means war driving, or hunting for wireless networks, new dive spots, check on old dive spots, and work on collaborative projects. Really, any activity that relates to hacking in some form or another.

There is, he confessed mysteriously, a loftier rationale behind it all for those who care to know. Wesley Felter, author of The Hack the Planet Manifesto, penned it beautifully.

Many people do not understand what it means to hack, to be enlightened by the fire of creativity. Hack the Planet is not a destructive force; it is a creative force that aims to change things for the better. It is the optimistic belief that tomorrow can be better than today. It is based on the fundamental idea that change is good. When I tell you that I want to Hack the Planet, I do not mean merely the physical geography of earth. I want to hack technology. I want to hack the media. I want to hack the economy. I want to hack society. You name it, I want to hack it In the late 70s, an engineer named Steve Wozniak decided that every person should be able to afford a computer. Woz hacked the planet.

A few years later, Richard Stallman decided that every person has the right to understand and control how their computer works and that software should not be owned or patented. This gave birth to the Open Source Project, GNU. According to Wesly Felter, “Richard Stallman hacked the planet.” The guy who created Burning Man – he hacked the planet too. And so are the people of the Third Culture, even presently. And now the patriotic Trevor, with his zoot-suited zest for swing dancing and breaking stereotypes, is “hacking the planet” in his own unique way, whirling and twirling with brains, flair, and a touch of Fred Astaire.