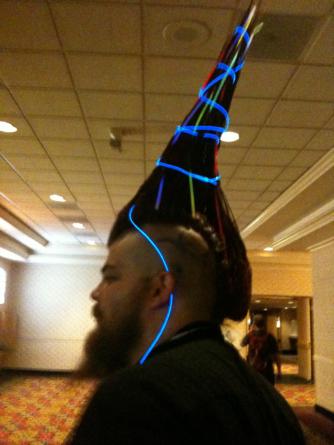 This is hacker hair.

When I saw this, I stopped the car and dashed out to take a picture on my cell. It’s a hair sword, a hair fin, a hair skyscraper that did not tip or bend, but stood tall and proud like tallest building in the world, the Burj Dubai. It’s shaped similarly too. This mother of all Mohawks must be a world record when it comes to Mohawk height. It just must. I couldn’t help but wonder how he got it to stand that erect for so long. But then again, he’s a hacker.  A.K.A. just because we can’t figure this out does not mean he can’t figure it out. Kudos to this cool C-P dude. COMPARE TO BURJ DUBAI HERE.  (Notice John Draper in the bottom left of the photo.)

If his hair is really stiff, I wonder how many times people joked that it could be used in self-defense?  Or as a lock pick.  Who needs Kevin Mitnick’s business card when you have an updo like this? He probably heard jokes like this all day long. Or maybe not. He seemed like a super tough, manly kind of man and I doubt anyone would mess with him.  I do wonder how he sleeps and drives though. Sun roof maybe?

What does purple hair say about the creativity and daring nature of a person? I asked if he colored it just for Defcon and he said no, he always wears it like this. I love it. I would hire him as CEO if he came to my office wearing hair like this; it’s proof he thinks outside the box and takes risks.  It’s Easter Bunny purple.

In fact, now that I think of it, I’ll ask him to send me the trimmings each time he gets a hair cut.

I can use the purple hair like Easter grass in an Easter basket . I can hide chocolate bunnies and jelly beans in it for Tolga. Wait. Make that Mountain Dew.

This is Klepto, spelled K13PT0 (sort of) from Cincinnati, Ohio. He got on his knees in front of me while a small crowd watched – just so I could take a picture of the top of his green Mohawk. It was a powerful feeling, seeing Klepto kneel at my command. I wished I was a queen so I could knight him or something.

Afros, but they’re not brothers. I think they became friends though as a result of hair bonding.

Meet the brilliant Joshua Merrill, also known as VJ Psyborg. He has a FRO to die for, doesn’t he? I discovered him in a club room managing a complex piece of video DJ software he architected himself to make a room dance with colored lights. It looked more complicated that the cockpit of space shuttle.

If it were me working that software, it would have fried my brain. For him, I guess it only fried his hair. (Just kidding.) A truly awesome guy.

I don’t know the name of this lovely bun-wearing female with the long front locks. But if I had to choose a name based on her hairdo, I would pick the name Gwenevere.  It’s the name of the legendary queen consort of King Arthur. She seemed worthy of that.

The woman is “Ed Word”, one of the sweetest people at Defcon I was told.

The Mohawk lady is actually doing a service to humanity. When people get a Mohawk, money is donated to the EFF. Now I have to find out what the EFF is. All I know is that these Mohawks are more than just a sign of cultural defiance, they represent the desire to help an important charity and it is quite profound.

Tia Marie again.  I had to run this cute blue photo again. She’s a community manager with Clp.ly.

I thought it was a URL shortener like bit.ly but it’s something totally different, extremely cool for content sharing, and something I need.

Are they twins? I forgot to ask. I think these guys might have been twins whose mother differentiated them through color coding. Good natured fellows, they were, always smiling and laughing.  Green One posed for this photo while holding that heavy server box and still kept on smiling and laughing. Red One enjoyed that.

[Zebbler], the Techno-Shaman, posing so I could take a picture of his dreadlocks from the back. This is how he looked when I met him, only he was walking.

JonJon the phenomenon. Short hair. JonJon has a second degree black belt, is a former professional wrestler, is a comic book expert and is a personal bodyguard.

He’s also a budding television producer and an entrepreneur.  But to me, he’s just JonJon.

Jeremiah Saint, music artist, Industrial music. Google him. He’s got sort of a side tuft with some fluff, and a short side, a straight piece and a puff and formaldehyde. Ok – no formaldehyde – it just came while I was flowing to get a goth-sounding Dr. Seuss rhythm going. He’s a vegan, among other things. More info: CLICK HERE

I wonder how a professional stylist would describe Jeremiah? In person, his look was uber stylish, dark, congruent and rather “hot vampire.”

Zack, aka Z3RO, and Cobolt whose Mohawk doubles as a behemoth can opener if used correctly.

I guess in hacker culture you get a free pass to hack and innovate on your hair as well as everything else on the planet. I’m wondering if a pink and lavender superbob would bring out a whole new side of me that I have been suppressing. Let me give it some thought…