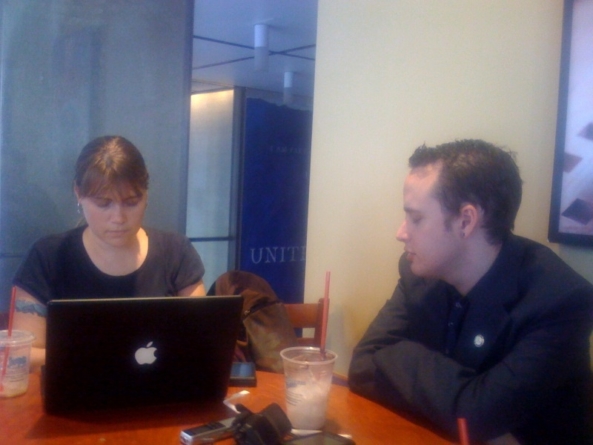 AFTER THE PANEL AT THE HOPE HACKER CONFERENCE

Lamo is speaking, other voices are indicated by [     ]

That was really quite civil.

They didn’t come at me with baseball bats.

at least some people clapped at the positive moments – like I said, I respect the right to clap at the other moments

[Was it what you expected?]

It’s actually better than I expected.

CRUNCH: when I first came here – they were fucking out for blood – I want to kill that guy… oh that fucking snitch guy…

[How nasty has it gotten?]

A few people spat at me, but that’s about it…

[Have you lost touch with Manning?]

Oh he’s completely incommunicado… I expect his attorney would have his head if he even thought about it.

[You guys were friends?]

I only knew him for 5 days. And his mode of introduction was basically…

I don’t like to use the word ‘fan’, but he was someone who was interested in communication with me based on my public persona…

[You knew what emotional state he was in??]

He’d undergone a recent breakup – before getting in touch with me… his significant other was in Boston. I kind of suspect his relationship ended because he was trying to get him to pass the information

I had no idea I was talking until I got here… trying to figure out whether there would be time and security arrangements… and whether, to a great degree, whether the crowd would be {}

No… for the most part people have been extremely cordial, with a few exceptions, and they’ve almost all come from the same cluster… so people have lived up to my expectations – the hacker community is tolerant, deferrant to people, and generally [reasons… not well understood??]

[How did you feel about Applebaum’s call for you to be shunned?]

He’s fairly entitled to his point of view, I would hope that he wasn’t representing Wikileaks. It’s not my place

I found that everyone, with a few minor exceptions, has been cordial, polite… the exceptions have tended to be younger in age, and I think that speaks to a certain groupthink there, but the ones who’ve been in the community longer have been the ones that have found me in corridors and elevators and let me know that they thought I did the right thing.

while there was certainly an appeal to emotion, I think maturity and reflection, has shown itself in the people that have been involved in 2600 and 1984 and…

but instead of leaking essentially his confessions as they would any other leak, they elected to release them in a side channel kind of way, to a blog that they had an excellent relationship with

[Do you have any regret?]

No I don’t – I think that a media outlet that had more experience in handling sensitive material would have handled that differently. And honestly it never occurred to me that it would be looked upon in that way – but I think it had the desired effect, I wanted to see whether wikileaks would live up to their own standards, and they did not

there was ntohing that leapt out to me, but in retrospect there were portions that I could have redacted, but then it wouldn’t have been the unedited confessional part

I didn’t deceive manning at any point – there’s no material answer to that question, it’s like asking if the stakes were high enough to justify murder, but because there was no deception, there was no murder, so… there’s no answer that’s really responsive to that.

Now I continued to talk to him in a large part out of a hope that he would say, no just kidding – and the whole thing would go away – I didn’t really believe that that would happen though

[Were you talking to him at the same time as talking to federal agents?]

[but you also didn’t disclose this to manning]

that would have been…

[isn’t that deception by omission]

there are a lot of things that we don’t admit in our day to day lives – so you believe that all information should be free – ok, so detail your last sexual encounter for me

[you’re cooperating with federal agents, and manning is unaware of it – how long]

[that’s a period of deception, it’s fair to say]

[they don’t really affect him – but what about stakes…]

in determining it to be outright deception by omission – it’s splitting the hair kind of thin – it’s omission, certainly. But it was to not compromise what was at that point an ongoing investigation

it’s not something that’s new to journalism either – I’ve done interviews where agendas aren’t disclosed, where contexts aren’t disclosed for the purpose of getting me to talk more openly – is that unethical would you say

[oh I didn’t say it was unethical]

it was a hard decision

[struggled with it – cooperating with officials and talking to Manning]

i struggled with pretty much the whole thing from my first contact with federal authorities to this point in time. And I can’t say from my point of view how someone sitting int he audience would view it – I don’t have their standpoint – but I really don’t think that they understand or appreciate the… moral struggle? I’ve elocuted, and I believe that there’s strong potential for harm or loss of life, and that for me made it a pretty comfortable call… I was actually fairly surprised, and this reflects a certain amount of naivety on my part… I was surprised by some of the reactions I received. I understood it would not be viewed positively but I didn’t expect the raw vitriol, the raw hatred… it comes from people not understanding the ethical conflicts – the desire to be a friend to somebody when there is another calling, another need..

[How long after talking to federal agents, did you approach Kevin?]

at the 2nd meeting – it was an unexpected meeting with fed. ag. and I don’t know it struck me as a little bit off, and I had this perhaps unjustified view that I might not come back from it, I might be held for questioning for whatever reason, and I wanted to make sure there was somebody who could speak to it… and I gave Kevin Lee Paulson information under embargo that he could not write about it until we discussed it further

if I’d done that I would have gone to a more mainstream publication, one that would put my face on newsstands – I went to kevin because he was trustworthy, he would write a good story, and

[manning was already in trouble]

he was being investigated, but not in custody

it wasn’t until he was incommunicado and presumed in custody, that kevin started saying he wanted to do a story on it – and I just handed the information to him for safe-keeping for want of a better word

Yes, I suppose it would have to be – at that time it was army counter intelligence.

[Do you expect to be testifying?]

If Manning doesn’t plea out, then I’m available to testify, no matter what the implications are for me.

[What do you hope happens?]

I’d like to see him get a relatively short sentence – I don’t believe in the concept of hitting someone over the head with a sentence as a deterrent, I’d like to make sure he doesn’t get access to that information ever again in his life.

He was engaged, based on what he’d told me, in breaking into, or at least exceeding his authorized access, to military records – so his legitimate access to that kind of information was not really material to that

and crimes against humanity…

If it turns out that he requires segregated conditions in order to be safe, then that sucks.

[Was there any point at which you felt you could trust Wikileaks to only publish information that wouldn’t get people hurt?]

I have some serious questions about Wikileaks – it postdates all this. But I think they’ve posted like 13 leaks this year and they get a lot more than that. Obviously a lot of it is noise…

[Dont that suggest that they would be more diligent?]

[Are you saying Wikileaks, or someone within Wikileaks]

at a certain point, the decision becomes fuzzy

[Are you saying there’s a chance that Wikileaks is selling secrets?]

[but you said you support them]

I never contacted the FBi, it was army counter intelligence

[what did your interaction with a ci consist of]

[did you send them the information as it came]

My ex was an army ci special agent – and they tracked down records to get ahold of.

I shared some of the information that Manning had shared with me with my ex, who still holds active clearance and… they’re immediate response, when I related the codename for one of the operations, was ‘never say those words again’.

[Did you understand what the situation was yourself – what the material risk was?]

it was a little bit of this and little bit of that – there was some that really leapt off the pages, and some that was pretty much just – you forget you ever heard those words… When I met with them to discuss them, the two agents I met with, I wrote it down on a piece of paper rather than say it aloud…

parts have come through cryptome and parts through an individual I know who’s a volunteer within wikileaks, who has offered that they suspect that that is the case, based ont he information available to them…

it’s not so much that it’s vague as it is that I don’t want to have anyone’s identity at wikileaks, who is potentially suspicious, be outed, based on information that they have access to…

[how has your life changed]

I have a better idea who my friends are – some disagree with what I did, but they’ve been very civil about it… on the other hand, my daily level of stress has gone up considerably, I get a lot of death threats, most of them not credible, but some worthy of followup… so far i haven’t sent any in for investigation by authorities… I figure if someone wanted to off me they probably wouldn’t send a note saying, To Whom It May Concern: If you Shall Attend Your Murder…

[Applebaum calling for no violence – that was something]

the nasty opposition is a vocal minority, but still a minority