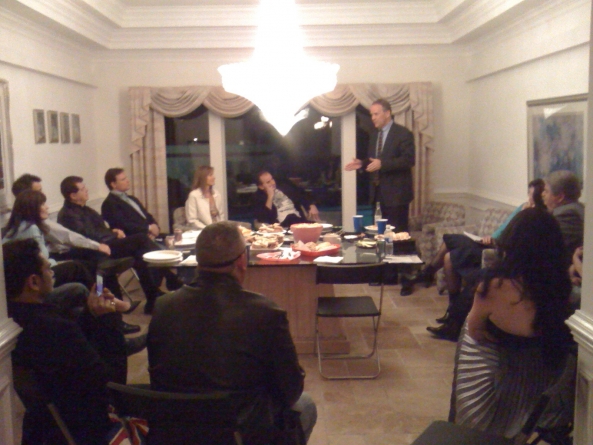 Tolga and I had a party in our home on Las Vegas. We invited two political candidates to hear what they had to say. They were Mike Montandon who is running for the Governor of Nevada, and Gordon Martines, a maverick man with integrity and experience who is running for the Sheriff of Las Vegas.  We also invited neighbors and friends. In the photo above, Mike Montandon is speaking.

Lawrence Pfeiefer having a ball

Posing for a nice picture – too bad all I had was an iPhone. Boy I miss my high-end camera.  I wish I wouldn’t break things so often.

This is Larry Pfeiffer – definitely a man with opinions, spirit and attitude. He’s one of the investors in the N9NE group and he’s sharper than a whip.  My favorite thing about Larry is that he punched Dennis Hof.

Mike and his lovely girlfriend Tracy saved the day by bringing extra food, drinks, cake and more.  Mike is talking to the candidate for governor.

Lola and I have become work out buddies now.  She has my dream arms and she inspires me.  L. Jay is a banker with an enormous vision.  I spoke to him about funding some films and also about starting a bank for women.  He seemed to love the idea.

Rome, the man with the eye-patch, has a personal security / bodyguard company. He was a sweetheart.  I wish I could afford to hire him to follow Kandice around.

David is my video technology colleague and dear friend. He has the cutest kids on the planet. Their mom, David’s wife, couldn’t come. She is a Tibetan princess without a country right now.

This is the cake Mike & Tracy brought.  Unfortunately, it was light, fluffy, creamy, chocolatey and richly delicious. and Tracy refused to eat a single piece!  So yes, I could not resist a chocolate binge for a few days. Thanks to Lola I’ve since worked it off though. Whew.

Obviously this is Tolga & Bambi the princess chihuahua. About a dozen or so guests did not know who Tolga was and they would ask me who I was with.  I would say, “The guy with the chihuahua.” They responded, “Oh him.”  I thought that was comical, since he is legendary in other places.  He didn’t care that it took a 3 lb reindeer chihuahua on his lap to help people differentiate him from the crowd. He found it amusing.

When Tolga would stand up and talk, mingle, or eat Bambi would scurry to her hiding spot on a big brown pillow in the corner behind the stairs.

Since I was taking all the pictures, this is the only picture of Tolga and I.  I know it’s blurry but I like it because it shows what a kiss would look like behind frosted glass.

Antoinette Montandon and one of our neighbors.

Mike Montandon actually has the aura, charisma and demeanor of a president. Tolga thinks he will become president of the United States one day. His web site is www.mikemontandon.com.He was Mayor of North Las Vegas, the fastest growing city in the U.S. for some time. His intelligent, articulate, well-studied, afraid of nothing, his family is exemplary and he won over everyone who listened to him share his solutions and strategies for Nevada. I think he is going to become the next governor of Nevada.

Gordon helped me once years ago and I never forgot it. I told the story to Tolga. When I learned that Gordon Martines was running for Sheriff, it became my turn to help him back.

When Gordon came he was shocked and proud at how far I had come. Tolga thanked him for what he did once upon a time. It was an amazing experience.

The next morning, one of my new friends, Patricia, brought over beautiful pink flowers to thank me for inviting her.  Wow.  I was so delighted I took a dozen pictures of this blooming gesture of friendship.  I am blessed.