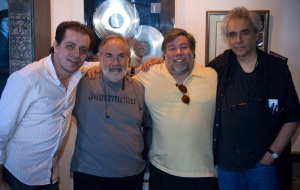 The platinum record on the wall behind them is for the Stevie Nicks album Bella Donna which sold 7+ million copies.  She customized this herself.  On it she put the words:

“Who dreamed with me from the beginning.”  And then in her handwriting it says “With love Stevie Nicks.”  Wow, that’s mind-blowing. Ten minutes ago I saw Paul using a broom and a dustpan to sweep the floors of en2go.  Paul, in case you didn’t know, co-founded and ran Modern Records with Danny Goldberg. Modern was the label for Stevie’s solo career.  Now Paul is married to Janis Fishkin – a brilliant and beautiful painter, collage-ist and creative thinker.

Interestingly, all four men in the picture have music in their past in a historic way.  Ted Cohen was a record executive with Warner Brothers and EMI, and from there morphed into a world authority on new media and digital entertainment. Tolga, of course, was a pioneer in digital music and you can read more about him on the link above. Steve Wozniak put on the legendary US Festival, starred in “Dancing With the Stars,” and rumor has that recently his wife bought him a guitar.  I wonder how his chops are?  Just thinking – wouldn’t these guys make a great band?  I wonder if Stevie would front it?