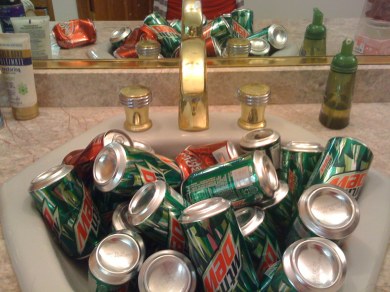 For all Mac developers who love Mountain Dew in Mountain View & elsewhere, here’s some trivia for you:
1. The great M. Dew was born in the 1940’s in Tennessee.
2. It used to be advertised as “zero proof moonshine.”
3. The bottles used to have a hillbilly character on the label named Willy the Hillbilly.” Willy was drawn by John Brichetto in 1948.
4. In keeping with the “moonshine” theme, the Mountain Dew bottlers even added the names of the bottlers, the sellers and their locations on the bottles.
5. Mountain Dew used to carry the saying, “It’ll tickle yore innards!” on the back of the bottles. SOURCE

Evidence that Tolga Has Been Coding: Empty Mountain Dew Cans

Evidence of a Fried Brain: No Sense in Having a Waste Basket by the Fridge.

Evidence that Christine Marie is Not Around: Typical Developer Dinner

Evidence of a Caffeinated Engineer: Developing on Too Many Computers