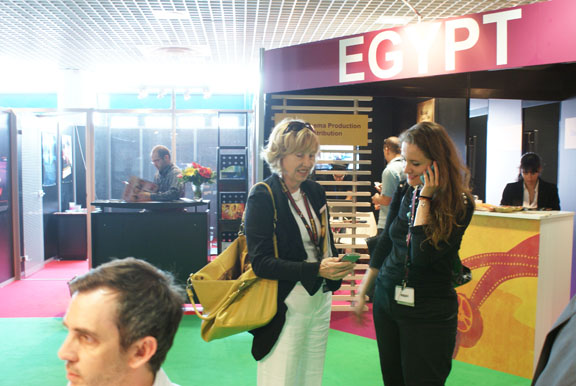 On the left is the legendary film producer and founder of Chickflicks, Sara Risher – sporting a yellow bag full of literature/film trailers/DVD’s  ??  at Cannes Film Festival last spring. (A free Starbucks to anyone who can tell me what was actually in that bag!)  In the middle of Sara’s deal-making days on the French Riviera, she was photographed talking to a colleague. Having been lucky enough to hang out with Sara a couple of times, I’m a bit fascinated by her unique style of being smart, strong, entrepreneurial and feminine.  Sara is warm, kind and caring, and boy does she know her industry.  I can’t picture her needing to “man out” by raising her voice or pounding the table in a business meeting, and I also can’t picture anyone in the industry not listening when Sara Risher speaks.

I found this online from the Time Warner Newsroom in 1999 and thought it deserved a fresh repost:

The company will “concentrate on stories that are close to my heart — character-driven pieces that often appeal to the female market, which continues to prove itself large and lucrative,” Risher said. “Being part of New Line practically from its inception and watching it grow into such a major force in the industry has been an exhilarating ride.”

For the past five years, Risher has served as Chairman of New Line Productions. She was an integral part of building New Line with films such as the Nightmare on Elm Street series and Teenage Mutant Ninja Turtles franchise.

“Sara continues to be an inspiration to all of us at the company and I’m delighted to support her new endeavor,” De Luca said. “Besides, if she didn’t hire me 13 years ago, I’d probably be delivering pizza somewhere.” SOURCE