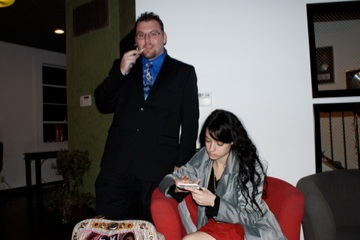 Adam Powell. I always knew he was smart. According to his parents, he was a child genius, playing with computers and programming since he was 6 years old. His brilliant father ran Federated – which was a consumer electronics chain, the “Best Buy” of its day, and his mother, a creative artist extraordinaire. A couple decades ago his father created shocking commercials starring Shadow Stevens where Shadow would suddenly go insane, talk about smashing prices, and then he would take a perfectly good television and, with the fervor of Jason on Friday the 13th, Shadow would smash the TV, kick it, ax it, throw it off a roof top, kill it, and there it would lay. A Dead Electronic Thing. Its blood, guts and cords hanging out, spilling onto the street.

But guess what. The commercials won awards and they got buyers into Federated.  And THAT, my fellow en2gonians, might explain why Adam is not your average, everyday CIO.  He grew up with unique circumstances in an electronic world that helped him think outside the box. His resume is shockingly packed with big things for someone so young. He has spent thousands upon thousands of dollars to get trained and certified in things that help en2go today. He explains technical things in a way the business world can understand, and he can hold his own – whether he’s in a group of financial people, or sword-fighting in armor during Medieval Reenactments, or playing X-Box.

Even Emerson (my 17 year old) told me he could tell how smart Adam was from World of Warcraft. I said, “How?” And then Emerson explained how difficult it is to accumulate certain things under those conditions in that amount of time, and the only way you could do it – is if you outsmart people a lot.

Anyway, night before last, Adam, Tolga and I were working all night in the same room. Tolga and Adam started talking. I couldn’t understand them – it was like a foreign language, technospeak from District 9 or something. But it was fascinating to watch and listen to these two–how they lit each other up like glow worms playing idea-ping-pong (discussing a tech/business strategy for servers or something over my head) and the idea-sharing came in layers, like cake and frosting, one layer after another, until the grand finale – when they got IT! IT, then, turned into a plan.

What they seemed to experience when they had a breakthrough – is what I imagine an average Joe would experience if he saw Holly Madison burst out of a giant, multi-layered birthday cake.

I watched Tolga look at Adam with such interest when he spoke, validating his comments, like – “you’re right,” “that’s a good idea,” and vice-versa. THAT is when it hit me that I had to write about Adam. THIS is why Tolga respects and needs Adam. THIS is the part of Adam the rest of the world doesn’t see.

Adam provides relief to Tolga. He helps him and excites him. He does grunt work like carrying equipment, installing software, purchasing licenses and making budgets and reports.  And he also does more high-level brain work and makes great sacrifices for Tolga, and for en2go.

He doesn’t exactly do code or answer his phone consistently.  But his brain power is monstrous. When Adam feels like learning to program, he will. But it doesn’t matter. In the mean time, Adam Powell, I thank you for all the incredible things you do, for hanging in there with us for better or worse, and for being an important part of en2go’s history. And its future.